It sounds to me quite a few people had a hectic, hard or draining year 2017, same applies to me. I drifted out of tarot, somehow just did not feel interested. Funnily enough, at the same time a weird, round dry patch the size of a coin appeared in my forehead at the spot of the third eye. As if my body was saying "you're drying up your ability to see deeper". I don't know if that was the real message - or if there was a message, not just a coincidence - but it did get me thinking.

As the longer-term readers of this blog know, I hover at the border of science and spirituality and sometimes feel more inclined to rely on science 100%, sometimes feel like there's deeper layers behind what we currently know. For example, I just read a hugely captivating book by Harvard University astrophysicist Lisa Randall, who specialises in dark matter and dark energy. The current calculations show that of our universe, only 5% is visible matter. The rest is dark matter or rather, undetectable matter (not the same as black holes, which are incredibly-tightly condensed ordinary matter) and dark energy, or undetectable energy potential.

Dr Randall talks about "matter-racism", meaning that it's quite condescending from us humans to assume we even should be able to detect and measure everything. Why should us, a random species on a random planet, have developed such incredibly apt or multidimensional senses and intelligence that we could have access to every possible particle type and interaction that takes place in the virtually boundless universe?

Anyhow, got carried away, that's not my topic! Given it's the New Year's eve, many of us are probably thinking about New Year resolutions. Resolution implies change, something that we wish to do differently, leave behind or start doing. And what is normally on the way of change? Fear. If change was easy, we probably wouldn't even call it change, it would just be a normal course of the everyday.

Fear is something I've been thinking a lot lately. Not on a personal level as much, but at the society's level. Politicians in particular in the US seem to be exploiting and cultivating fear for political gain and that, in my opinion, is the low blow for the human intelligence (not to mention ethics). Eliciting fear is easy, because we naturally want to avoid danger. And, unfortunately, many leaders exploit this natural response.

The unknown, uncertain, new or different can easily elicit a fearful response. What I think is a true measure of maturity is our ability to recognise and handle fear. Any three-year-old can be scared; it's instinctive. But it takes a mature, level-headed person to be able to say "calm down, let's take a proper look at this. Things are not that bad. Maybe we just misunderstood, or can change things so they are less scary?"

When is fear needed and when it's not? In some situations, fear is handy. It's better to be cautious when attempting something risky, such as crossing a dodgy bridge somewhere high up in the mountains. But, even then, is fear really keeping us safe? A spoonful or sprinkle of fear can be a good thing, but fear can also paralyse. In particular when it comes to a life change. Better the devil you know, they say, but are wrong.

Why would it be better to stick with something undesirable, unsatisfactory or even downright unhealthy just because the unknown devil can also be bad? If it turns out to be, then, a new change is required, until things are better. Life by definition is a series of events where an organism attempts to adapt to and thrive in its circumstances. If that does not happen, there's no life. We only have inorganic matter: dead weight.

Here's a New Year's spread to study fear, what to let go and how to let go.

As a "worked example" with my own responses.

1. What unfounded fear do I have? KNIGHT OF DISKS (PENTACLES)

I fear being stuck in a rut, having to repeat the same things every day. Slow and steady in my mind often means slow and tedious. That is very true and that is perhaps my worst fear. Even this blog is themed Tarot for Change, because I often value change higher than routine, newness over continuity.

2. How can I best let go of that fear? SEVEN OF SWORDS

This is an unexpected answer. Many people interpret 7 Swords as a card of underhanded moves and manipulation, as it depicts a person stealing swords from others. However, I've learned that for me this card often means "research", finding and taking others' ideas (swords) for my own purposes. To overcome the fear of the rut I should exercise my mind, learn more about techniques to tolerate routine and perhaps spice up the everyday with unexpected moves.

3. What will change in  my life if I overcome the fear? THREE OF CUPS

I'll find new or old friends to connect with. 3 Cups is a card of get-togethers, friendship, celebration and connection with like-minded people. Well, that's an absolutely positive outcome!

4. How can I live more fearlessly overall? ACE OF STONES (PENTACLES)

This card shows a boulder and the card's traditional meaning is tangible, physical opportunities and gifts. I think it reminds me to be grounded. There's no need to let fears run havoc. Just stay down-to-earth, take each day as it comes, enjoy the physicality. Fear is, after all, preservation instinct running overdrive: we are only frightened when we fear - consciously or subconsciously - pain or death. But, being a physical creature also has benefits and joys, not only fears about potential harms and risks.

5. How can I help others overcome their fears? THREE OF WANDS

This card traditionally shows a person gazing at the sea, to the approaching ships. It means planning, looking towards the future, having taken the first steps towards something bigger and better. I can help others by reminding them about the potential for expansion: when life is not bound and constricted by fears, it can be larger, bolder, louder, fresher; what we choose to make of it.

Have a fun and fearless New Year and a fortunate year 2018! 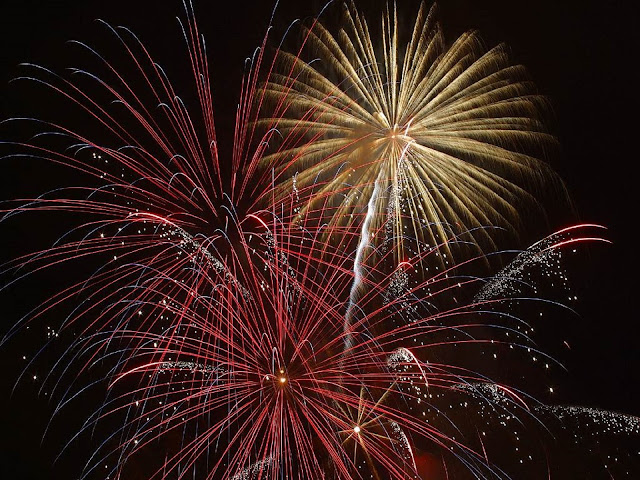 Thank you for commenting!